This article by Katie Hyslop, Tyee Solutions Society, originally appeared in The Tyee on 21 Dec 2015, and was supported by Fostering Change to help increase awareness and engagement in issues facing young people in transition from care to adulthood.

When your "parent" is the province, your "home" leaves you on the midnight you turn 19. For Jason Preece, though, the first taste of independent living came almost a year earlier.

After over a decade in the B.C. foster-care system, and so many moves he lost count past seven different placements, "I'd never really had my own suite," said Preece, now 21. "I didn't know what to expect."

But thanks to Support Link, a program offered by the charity Aunt Leah's Place to youth in provincial care ages 15 to 18, Jason's early move out on his own came with help in paying the rent and weekly classes in how to live independently.

(Disclosure: many of these groups receive funding from the Vancouver Foundation, which is also among the funders of Tyee Solutions Society. See full statement at end of the story.)

With his own apartment, Preece could "go where I wanted" for the first time. Unlike some foster homes he'd lived in, there were no barriers to accessing food, the washing machine, or even the money the province provided for his support.

Suddenly he was buying his own food and clothes, but had to learn how to shop and create a budget. Support Link covered those topics, as well as mental health issues, in its life skills workshops.

Even so, when Preece finally aged out of care in April 2013, ongoing challenges with acute anxiety, depression and post-traumatic stress disorder threw him off course. Losing both Support Link and his Ministry of Children and Family Development assistance and social worker, the 19-year-old managed to stay housed but dropped out of school and stopped going to Aunt Leah's.

"It was a loss of guidance; this ominous parental figure that has been following me for all these years," Preece reflects now. "On one hand, I was quite relieved to be free. On another hand, I had this just great big, empty kind of senseless direction of 'Where do I go next?'"

Preece knows he was lucky not to end up homeless. Many foster youth in B.C. and Canada aren't so fortunate when their provincial support comes to an abrupt end. Almost half of Canada's homeless youth spent some time in care. At least one estimate puts their risk of an early death at 40 times that of housed youth.

It took a few months for Preece to decide to return to Aunt Leah's. There he joined the organization's Youth Advisory Committee, taking over as chair soon after. The committee connected him with other youth from care and helped dissolve his anxieties with public speaking. Soon he was volunteering with New Westminster's 12th Street Music Festival and marching in the Vancouver Pride Parade.

Another Aunt Leah program, The Link, offered Preece a food cupboard and supported him to re-enrol in adult education. Today he's a part-time peer specialist at Aunt Leah's, which meant giving up his benefits from The Link program but did provide the opportunity to help other youth in care.

"It's really cool to be on that other side, supporting the youth in the same way that I received support when I was younger," he said.

Flexibility on 'aging out'

In the Kwayatsut housing tower on top of the Broadway Youth Resource Centre in Vancouver, 30 of 95 studio suites are reserved for youth 16 to 24 years old. Ten are reserved for queer youth, 10 for Aboriginal youth, and 10 for youth under 19.

Although youth can't stay in Kwayatsut housing for longer than two years, they don't have to leave when they turn 19. Exiting the ministry's care system without having to move -- and while still accessing services from the Pacific Community Resources Society that operates the youth suites -- makes the transition to adulthood a bit smoother.

Where youth go next depends on whether they can afford market rents, or whether poverty or disabilities qualify them for social housing. 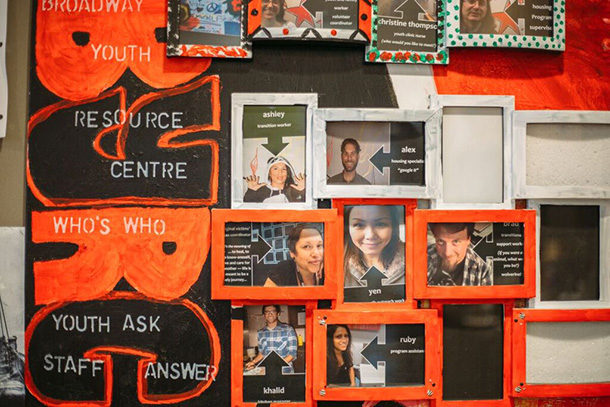 "There is the potential for lateral moves within the BC Housing/Vancouver Native Housing system," said Zach Batalden, who oversees Kwayatsut's youth housing for Pacific Community Resources Society.

Either way, that next step can be daunting. To help prepare, the ministry often refers youth ages 17 to 19 to a Resource Society program which connects youth on the precipice of aging out with health, employment and housing services that will last beyond their 19th birthday.

Officially the Youth to Adult Transition Program is meant to help youth reach their "aging-out goals" -- finding a place to live, graduating from school, getting a job, enrolling in post-secondary, whatever those may be -- by the time they're 19. But in the past year, program supervisor Brad Napier said, the province has been more "flexible" in how the funding is used.

For example: "They're 19 by virtue of their birthday, but we still have these four things we want to get done [with them]. So lately it's been [the ministry that] has been saying, 'Sure, go ahead and work with them some more," Napier said.

Once a participant's goals are reached, their relationship with the Adult Transition Program ends. But youth can continue to visit the Broadway Youth Resource Centre to say hello, use the computers, or access other services, until they turn 25.

'Survival needs met... and some choice in life'

Not everyone is ready for the Youth to Adult Transition Program as they approach 19, however. Some struggle just to make it through each day.

There's a small but significant number of youth in Vancouver's impoverished Downtown Eastside community whose mental health issues and drug involvement have made keeping them in housing almost impossible.

"The young people that I work with have been confronted with such incredible extreme barriers, things that we can't even comprehend, that what they absolutely deserve is just to have their survival needs met and to have some choice in their life," says Vicky Shearer, youth co-ordinator for the Portland Hotel Society.

Until a short while ago, they were a population that the ministry's workers in Vancouver didn't believe existed.

"It was sort of a blanket response... that [young] people who are homeless in the Downtown Eastside didn't choose to reside there, were there against their will, or could be offered housing through other youth services," Shearer said.

Yet youth were showing up to life-saving PHS-operated programs like the Insite safe injection room. Some had family or partners living in the neighbourhood, so that's where they wanted to live, too. "Or, even if they didn't want to reside in the Downtown Eastside, their behaviours were too complex and problematic for traditional youth services," Shearer said.

For three and a half years, PHS worked on a pilot Youth Housing First project. It initially intended to provide 15 youth ages 18 to 25 who had been homeless for at least six months with stable housing, medical care, help getting a bank card, and whatever else they needed to stabilize their lives in the Downtown Eastside. By the end of three and a half years it had supported nearly three times that many youth, over half indigenous.

"Almost exclusively IV drug using, exclusively drug using," Shearer said of the youth clients she worked with. "And known to us, known to other youth agencies. There had been attempts to connect them to other services, other housing providers, and they'd either been evicted or denied access."

Nineteen are still housed with PHS. The rest are either living on their own, in mental health supportive housing, or in another youth housing program. No one has been evicted since they joined the program.

With additional funding from the Vancouver Foundation, PHS has now expanded the Youth Housing First program to provide more clinical services and employment training through its social enterprises like the East Van Roasters chocolate shop.

But Shearer notes that PHS only achieved its success in co-operation with other organizations. "Because we're all awarded different resources and different pockets of the [youth] sector, the only way for us to actually be effective is to almost combine our resources," she said.

Reduced tuition, for those who know

For some youth Shearer works with, high school graduation, post-secondary education and a career aren't on the table right now. Maybe never. For other youth aging out of the care system, obtaining stable housing is just the first step in finishing their education.

"Once they get their housing secured, the next thing youth ask for is help with education," said Gale Stewart, executive director of Aunt Leah's Place. "That shouldn't surprise us; that's what kids do at home." 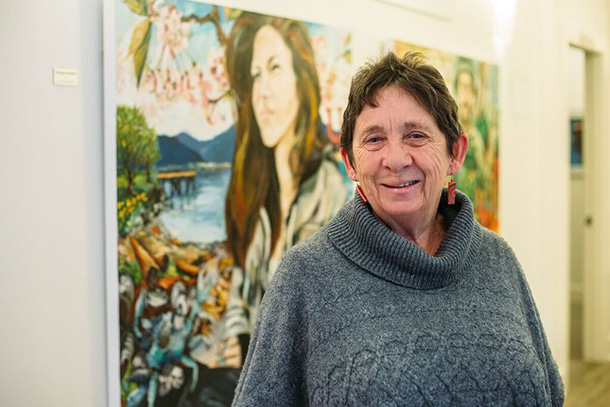 According to Aunt Leah's last annual report, only 27 per cent of foster youth in B.C. graduated from high school on time in 2014, compared to 80 per cent of parented youth. The service organization is trying to change that with its 'SEFFY' program. The sprightly acronym stands for Supporting Education for Foster Youth.

Since its inception last year SEFFY has supported youth in or graduated from the K-12 public school system with tutoring from an education specialist and study hall-like sessions. It seems to be working. Three quarters of under-19s enrolled in SEFFY are in school; 58 per cent are set to graduate on time.

Seven post-secondary institutions in B.C., as well as the University of Winnipeg and all universities and some colleges in Ontario, waive or significantly reduce their tuition fees for students in or from provincial care.

But not every youth knows those waivers exist or want to attend those institutions. And expenses beyond tuition, like books, tools, school supplies, are their own to cover.

The Federation of BC Youth in Care Networks has a dream fund to provide small bursaries to help youth in care cover those extras. Its Education Achievement Bursary offers up to $5,000 to help youth attend any accredited institution in B.C.; a Reach for Success Bursary provides up to $1,500 for any non-post-secondary workshop, skill building activity, or other course like first aid or drivers' education.

It also tries to spread the word about those no-to-low tuition deals. "I would say 75 per cent of the applicants that apply for [our bursaries] are unaware that colleges or universities are offering these tuition [waiver] programs," said Brittaney Andreychuk, program manager at the federation.

And, "should they not be selected for that tuition waiver," Andreychuk added, "they can always come back to us for our bursary."

Aunt Leah's also offers post-secondary or job training bursaries, funded by corporations including Telus and HSBC and its own fundraising. Its staff helps youth through the complicated process of applying for those tuition waivers.

To its communications co-ordinator, Clete Hanson, Aunt Leah's is "just filling that education role that a parent normally would do."

It's a role that we the public volunteer for when we take a child into government care. Too often, we don't do a great job. Groups like Hanson's demonstrate how we could.

This article was produced by Tyee Solutions Society as part of its Education and Youth Well-Being hub, with support from Vancouver Foundation's FosteringChange.ca initiative. Vancouver Foundation does not control or endorse the particular content of TSS' reporting. Other publications wishing to re-publish this story or other Tyee Solutions Society-produced articles, please see this website for contacts and information.

Youth from care 5x more likely to die than the general population, BC Coroners Service report

A May 2018 report by the BC Coroners Service highlights that "young people leaving government care died at five times the rate of the general population of young people [17-25] in British Columbia." See the clear recommendation echoing our call for universal AYA supports.

Now that important progress has been made Vancouver Foundation is returning Fostering Change to the community that inspired it.

This story by Sarah Petrescu originally appeared in the Times Colonist on October 24th, 2017.